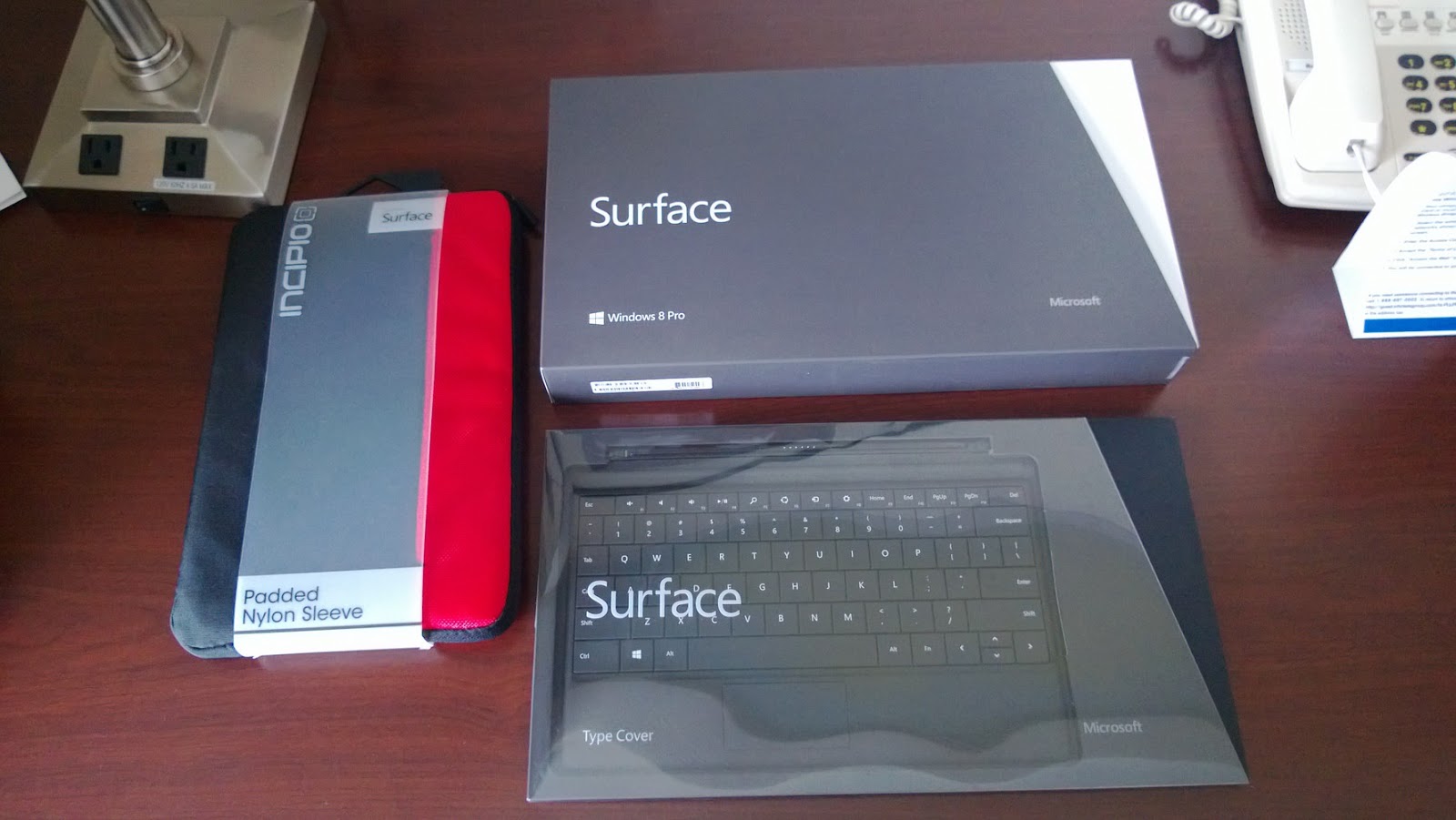 A couple of weeks ago I’ve been in Miami and had the chance to buy a Surface Pro 128 GB.

Until now, I used an eBook reader, an iPad and a notebook to get things done. In the last weeks I forced myself to use the Surface Pro as my primary device and see if it can fit my needs and I can ditch both the notebook and the iPad.

Step 1, replacing the notebook and the iPad

The first limitation I found was in replacing my notebook. At the office, I have a docking station with three monitors, and once you are used to it, it is impossible to go back. At least for me. Therefore, I ended up leaving my notebook in the office, doing the job of a desktop one, and using the Surface Pro as my new device for travels, taking notes and developing at home. Dropping the iPad was quite easy, because I just use it for browsing the Internet, reading PDFs and a game or two sometimes, nothing much. I tried, without success, to use the iPad for note taking or writing blog posts, but the on screen keyboard, for this kind of operations, is not for me.

The second thing I found limiting is the battery life. If you think of the Surface Pro as a notebook, than the battery life is amazing and the weight for the power inside this little thing is very good. It can last 4 hours with no CPU intensive tasks and low screen light. In addition, that is more than my actual notebook (it is an Intel i7, but two hours are not so much). If I think of the Surface Pro as a tablet, than the weight and the battery life are not even comparable to whatever tablet on the market.

This is the big problem, there are no apps on the store and the majority that I tried felt like some superficial work just to push something on the store and hope to get some money. Fortunately, the marketplace let you try the apps before you buy them and I think it is a big plus. The famous apps, like Twitter, Facebook, Good reader, Zite or Instapaper, are way behind they counterpart on other stores or, worst, they are not even there (an official Facebook app is still missing, seriously). I really miss Zite and did not found a replacement yet. I wrote to Zite asking if they will release a Windows 8 version, but no answer yet.

So, after some digging I found a decent client for Instapaper (but I still prefer the one for iPad) and a nice news reader. One Note, fortunately, it’s there and is better than ever. For the Good reader replacement, at the moment I am using the built in PDF viewer. I found this one, but it has no trial version and seems to miss some elementary features like copy and paste. So I am sticking with the default reader until a more mature product come to light.
Something not related to work, but to relax is the video player. The one bundled with Windows it is ridiculous and are the other players you can find on the marketplace. A couple of them can play video files with external subtitles, but, with one of them you have to select the “.srt” file manually every time you play a video. None of them, at the time of this article, can play a full HD Matroska decently.
So no player to use with your fingers, but, at least, the desktop come to the rescue with plenty of choices (not finger friendly, of course, but I can live with it).

Everyday use with the Type Cover

The Type Cover is amazing. Writing with it, once you get accustomed to the keys layout, is flawless. I can write with the Surface Pro on my lap without problems. The on screen keyboard is better than the iPad’s one, but in my opinion is still not enough for writing long portion of text or code. One thing I found annoying are the function keys, every time you need to press one, you also need to press the “Fn” key. I was not able to enter the Bios and find an option to invert the behavior, like any notebooks on the market. For now the solutions to serious coding, is to get a BT keyboard or using the ANTSOFT Key manager.
Last thing I found messy, is the track pad while coding. Too often I touch it with my palm and move the cursor. So after 5 minutes digging I found a solution developed by Microsoft itself. Do not ask me why they do not talk about it anywhere. Anyway, after setting the track pad to my needs, everything works like a charm.

Everyday use with the Stylus

Taking note with the stylus is fantastic, the feel of it while writing and the handling of pressure is really something. I was happy like a kid when I discovered that for erasing something it was enough to turn the pen and erase just like a pencil with the eraser on its end. Using One Note with the pen for note taking, while talking to the customer, or in train to just note down some drawing, finally allow me to leave at home my notebook.
Another advantage is the integration between apps vie the Charm bar. With a simple swipe from right to left, you can immediately send via email a copy of the notes just written. With Sky Drive, integration is also easy to share the notes with a group of people for modifying them or simply give to some of them read-only access. I just suggest to calibrate the pen before using it for optimal performance.

Everyday use with the apps

What I noticed immediately while surfing the web, is when I want to download a file for later use. For example to copy it to another PC or open it later, because I do not have the correct application yet. I can simply download it wherever I want, do whatever I want and when I want. With the iPad, I was forced to send me a link so I can download it from my notebook.
Another good thing is that I have the Office 2013 installed, so no more trouble opening that PowerPoint for showing to the customer and discovering that all the animations are gone. I can finally handle all my Word and Excel files without compromise. I purchased an office suite for the iPad (for $15.99) but Office 2013 wins hands down. However, there is still a lot of work to do to better support touch. Outlook is usable for quick mail checking and replies, but nothing more without a keyboard.
The USB 3.0 port is awesome; I transferred an 8GB file from an external HD in less than 1 minute and half. (about 102MByte/s). The mini display port is also convenient, with a 30/50$ adapter you can handle an external HDMI, DVI or VGA port.

In the end, the Surface Pro is the tablet/notebook I was looking for. Lightweight with a battery duration acceptable for what it gives you and a nice tool for note taking that do not let me miss paper and pen.

I can write code nicely and with its i5 dual core processor, I can compile with Visual Studio or Delphi without trouble. I also use the Kinect for my development with no problem at all.
The only thing that would be nice now is that the rumors about a keyboard which extend the battery is really in development.